April 9, 2013 at 8pm at Club Passim with Steafan Hanvey from Belfast 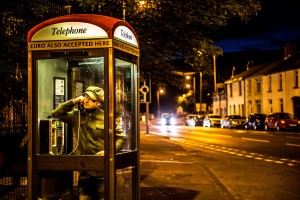 Steafan Hanvey originally from Belfast is currently on his US Tour. He will be stopping off in Boston to play Club Passim and Katie McD will be opening the show.

He is also doing a multimedia presentation at Boston College on April 8th entitled ‘Look Behind You!’  This is a performance-lecture that details how a father and son have negotiated the personal and political landscapes of Northern Ireland. A melding of image and voice, anecdote and memory, it showcases the prize-winning photojournalism of Steafán’s father Bobbie along with radio-edits of his interviews with some of Northern Ireland’s best-known figures. Together, Bobbie and Steafán document the ordinary and at the same time the extraordinary – mums and dads, police and priests, the loved and the loveless, soldiers and paramilitaries, plain-folk and gentry, politicians and voters, poets, singers, painters, travellers gathered around a fire on a cold winter’s morning, the living and the dead.

April 8. Boston College. “Look Behind You! A father and Son’s Impressions of The Troubles in Northern Ireland Through Photograph and Song”.
This entry was posted in Uncategorized. Bookmark the permalink.